MEMBERSHIP: How Do You Establish Membership?

There are many groups you meet in your lifetime, some groups you become a member of and some groups you don’t. Partly it’s the process for a member, but partly it’s also the organisation or the systemic process. How do you establish membership?

Eric Berne, in his book, Structure and Dynamics of Organisation, talked about how from a member’s point of view you join when you have a wish and the safety, the security to commit yourself to a group, but also a willingness to compromise in your independence and accept collective norms. So long as the members of your group don’t have a wish to join, or the safety to join, and are not willing to compromise their own independence for the acceptance of collective norms, they are actually not members and you don’t have a group.

If you have a team where there are people who are just doing their job, but don’t want any discussion about the values of the group, you don’t have membership. I work with a lot of engineers, they will stay solo experts, but they won’t actually start working as a group as long as they insist on their independence versus collective norms. And this is something to watch out for.

Berne said from the organisational point of view, that member belongs when they’re:

I want to talk about the process of being accepted by others, because I often see group problems because from the organisational point of view they do recruitment on the basis of “do they meet their requirements”. Good recruiters look at “Do they fit?” But what recruiters don’t always look at is adjustment. So are they willing to give up their individual stuff and to abide by the values and ethics of the group. That’s mostly missing in recruitment.

Commitment of the member and the acceptance level of the others of your membership goes through stages, and this was beautifully described by two researchers called Moreland and Levine who describe five stages of membership of commitment and acceptance of membership.

Stages of acceptance of membership 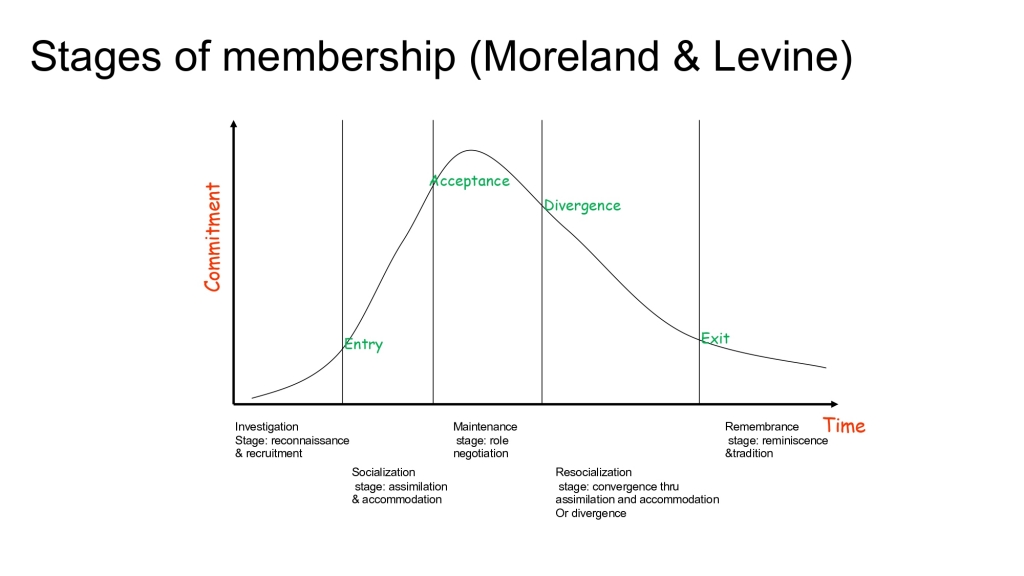 In this first stage of membership an individual meets a group and starts to investigate and do reconnaissance. Is this person fit? Are they illegible? The member also investigates. Is this somewhere I want to belong? Membership is a two sided thing. Belonging is not just that you are accepted by a group. Belonging also means you accept the group. And if these two things don’t fit, you’ll never feel a sense of belonging. So, in this first stage, you do reconnaissance or scouting.

You are in the group, then you’re assimilated by the group, but also you accommodate. This is a first adjustment to the group values and ethics. If you want to belong this is the behaviour you need to show.

A good question is: “What do I have to do around here to get a promotion?” because this is not about competence, but really about values, then you know a lot about how to accommodate and assimilate in the group.

You’re in the group, you’ve done your first adjustment, and then you get into a stage where you kind of know what to do, and you start to negotiate your role. This is what you asked of me, this is who I am, and I want to negotiate about what I have to do here and what I have to represent in this group. If you do that well this is a mutual acceptance of your membership. First, there’s an individual adjustment. Now there’s a mutual adjustment.

By chance, I was talking to a group leader the other day, who was in despair. And she said to me, “We’ve grown organically, and now we’re in the stage where we have to write down formal, role descriptions. But what I’m finding is I’m giving the group a lot of autonomy, they’re writing their role descriptions, on the basis of what the organisation needs, and then it’s feedback into the group and the individuals are deleting everything they don’t think they need to do.” A great example of the mutual acceptance process actually working, because you have to negotiate, it’s two sided.

You’ve gone through this reconnaissance, you’ve done the first individual accommodation, now you have the mutual negotiation of your role. And then you go to a place where you re-socialize. You have to renegotiate at a much deeper level or accept the differences. This is where the group character comes into play, because in this divergent stage, you not only assimilate someone but you also accept divergence. The more character a group has, the more room there is for a persona, for being yourself in a group, the more acceptance there is of diversity and divergence.

Divergence is possible if the boundaries of a system are stable. A leader should create an acceptable level of divergence when there’s a stable group structure, and the member has been assimilated. Now is the time to accept differences, because without differences there’s no innovation.

This is where a member exits and needs to leave behind a legacy, but also the group needs to reminisce. It’s important when you manage group membership that you mark the exit of members. If you don’t do that people start to question how important they are in the group. And if you don’t leave a stage of legacy and reminiscence, it doesn’t offer the group the closure it needs to continue without that member.