Purpose of the workshop is to gain further insight into your personal and professional journey and understand your next step of development.

By the end of the workshop the participants will:

The workshop is relevant for both personal and professional development. 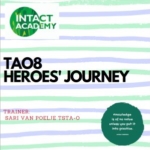 We often know what we want to change, and even how to change it, but somehow we often do not make those fundamental changes that would improve the quality of our personal and professional lives.

Eric Berne offered us an explanation for our lack of fundamental change, through his concept of life script. Berne defined script as an unconscious life plan learned in early childhood, reinforced by parents and reinforced by later events, resulting in a known pay-off.

One of the sources that inspired Berne to think about life script was the work of anthropologist Joseph Campbell. Campbell analyzed stories and myths from all over the world and wrote his book ‘Hero with a Thousand Faces’ in 1949, to develop a 12 step model of development.

In this workshop we will journey through the twelve steps of a heroes journey, discovering the mythic aspects of your leadership script formation. The twelve steps described by Campbell are: prologue, call to action, refusal of the call, meeting of the mentor, selection, king for a day, meeting the goddess, ordeal, the dagger, the return to the light, death and resurrection and the elixir.

We will use film to illustrate each step, describing the essence of each step and the paradoxes that you will need to be overcome to progress to the next stage of development.

The workshop is experiential, framed by conceptual teaching and plenary discussions.

Participants can come both for personal and professional development as leaders, coaches, consultants, educators and psychotherapists. There is a maximum number of 24 participants.

The workshop will be given in English and/or Dutch.