Team Coaching: Every Solution Creates The Next Problem

Every team starts as an idea in the head of the founder. With success comes complexity. Complexity allows specialization and volume, but also creates loss of focus, resources and direction. In this blog we take you through the challenges of four main stages of development.

My name is Sari van Poelje. I’m the Director of Intact Academy and of Agile Business Innovation. We help businesses innovate more quickly than the products and we teach others to do that too in our Intact Academy for coaches and consultants. You can find us on the websites, www.intactacademy.com and www.agilebusinessinnovation.com.

Today we’re talking about the development of teams. There are three levels in a team that are always active. We talked about structural, relational, psychodynamic level. Together that gives you the photo diagnosis. Now we’re going to talk about the film diagnosis of teams:  What stages of development do teams have? What should leaders do at each stage of development? What should you do as a team coach?

When we do film or structural diagnostics, we have to realize how a structure develops over time. The first state of developmental structure is that the leader has an idea. He or she wants to create a team to create a product or a service. The team always starts as an idea in the head of the founder. After a while if they’re successful, they try to find other people to join them. In this first visible stage of team formation, the formation of the relationship between the leader and the member is central to the team development. The member sometimes stays because they’re interested in the product, but more often because they believe in the leader. The leader is looking for people who will do everything that is needed within the team, without having to manage them too much. Most leaders start with the mistake of choosing friends and family to join, because they think they don’t have to manage them as much. 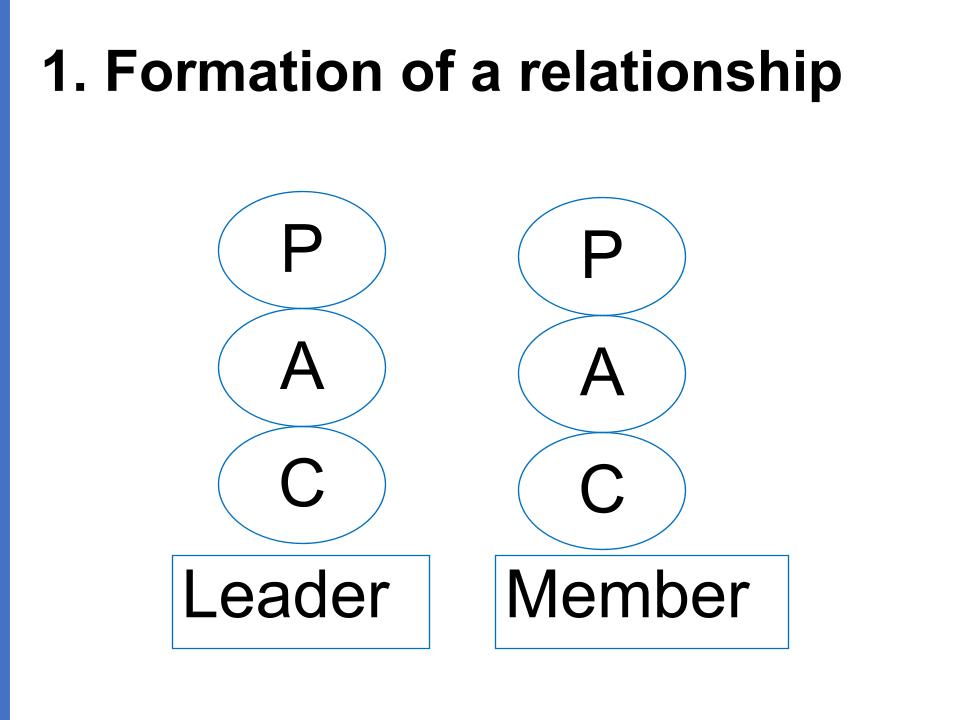 If the product and service hits the market, and demand exceeds the possibilities of a small group, more people are recruited. At that point, we have a leader with a clear boundary, usually they’re charismatic and directive. The boundary around the team isn’t very strong, people move in and out depending on how they’re feeling, if they get along with the leader or not, more importantly, if the leader gets along with them or not. This means at this moment that the team is functioning but the identity of the team isn’t set very clearly. The only thing that is set is the product, service and the leader. At this point, the market knows that there is an interesting product, but they’re not sure who’s making it yet.

At the third stage of development, what we see is that this boundary around the team becomes more clear. That means it’s defined who’s in and who’s out. The identity of the team becomes as clear as the identity of the product and service. As they’re growing, the leader needs to pay more attention to the customers. As a consequence they ask the people who’ve been there longest, to be coordinators or team leaders under the big leader. The big leader starts to focus outside. This creates what we call vertical differentiation. As vertical differentiation develops, the team becomes more complex, with concentric team leadership. The practical consequence is that the original leader has intense contact with the team leaders, but the members of that team are one removed from the founder of the team. This usually means that members get more attached to the organization as a whole; than to the leader. The leader is, at this point, busy with customers, with bringing in new ideas, but also busy with; How can I lead my team leaders so that they can lead the members? It becomes a complex job with focus outside and a focus inward. 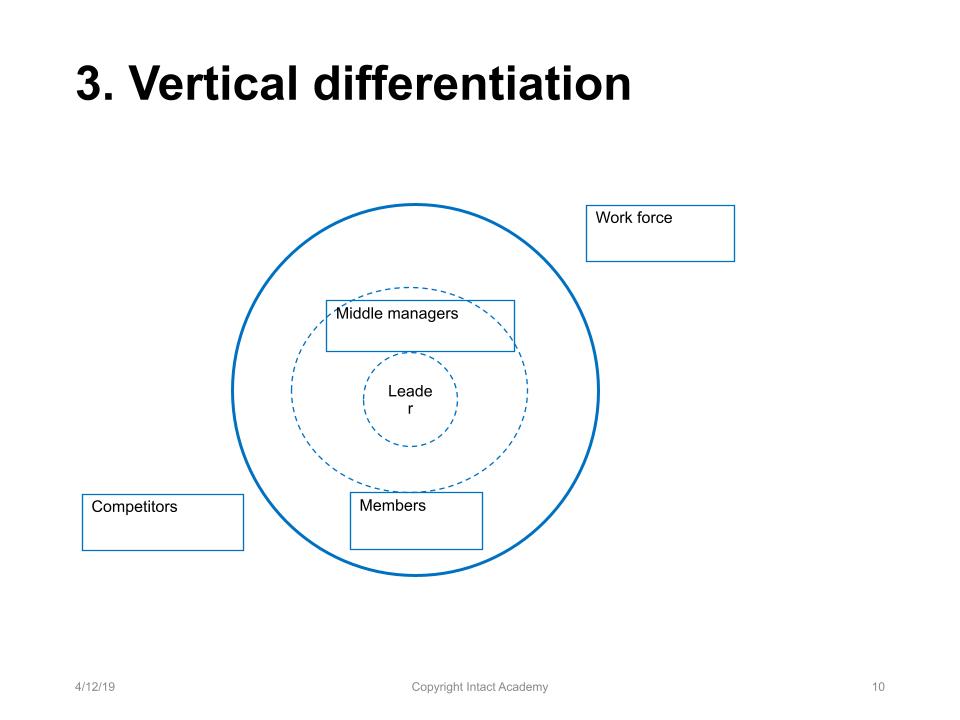 At the fourth stage of team development, we have vertical differentiation, and horizontal differentiation. That means that the members start to get specialized in differentiated roles. Some are busy with production, some with sales, some with after sales. You also see that the recruitment in the team changes. At the beginning, it was really people who were attracted to the leader, later to the product. Now they are hired for their expertise in one certain area. Here we have a fully developed team. You’ve got a leader, you’ve got different concentric circles of leaders under that, you’ve got specialized members with minor internal boundaries in between.

After this stage of team formation, other stages are possible, depending on the market demands. However, what’s interesting is that the team development goes from very simple, one person doing everything, which has the benefit that you don’t have to manage anyone but has the limitation that you can’t produce great volumes because you’re limited by time and by resources. As you grow, the team becomes more complex. Every boundary you create allows more volume but also more loss. Every boundary you create, you lose information, you lose energy, you lose money. Every boundary needs to be managed, so you have more overhead. The benefit of creating more complexity is that you can specialize in certain products, in certain segments of customers, which means you can both create volume and specialization, but at more cost.

What I’m saying is that these stages of development go from simple to complex. This means you can create more product for a complex market and more volume. However, each time you create complexity, you’re going to solve one problem but cause the next. There is no way you can skip development stages. People really like to go from very simple to completely fully developed, that’s not really possible, because each stage of development gives specific team learning.

We’ll talk about that in a while.

Good luck with your development.