There are four behaviors that lead to relational breakup, both in couples and in teams. If I see this type of behavior, I know this team is, not moments away but, on the way to self-destruct. If I see this then we need to stop and focus on the process.There are four skills that I teach teams so that they stay out of those behaviors.

My name is Sari van Poelje. I’m the Director of Intact Academy. We run programs for coaches and consultants from beginner to executive coach, to team coach, to supervisor and beyond, accredited both by ICF and EMCC. I am also the Director of Agile Business Innovation. We help businesses innovate more quickly than their products to accelerate their time to market. You can find out more at www.intactacademy.com or www.agilebusinessinnovation.com.

We were talking about norming issues in groups and the importance of teaching people to negotiate. There are many ways to negotiate, but more importantly is to know what not to do while negotiating. I want to use John Gottman’s theories about that. John Gottman was an Engineer at MIT and contrary to what his PhD advisor said, he started to write about human relationships. He was interested in why people broke up. He constructed a way to look at different interactions between people and categorize those interactions based on what he had observed in, what he called, The Love House. Then he started to predict how long people would stay together. This Love House was a house where they rigged all sorts of cameras, they’d invite couples into the house and film whatever they were doing. Based on all those millions of transactions, they created behavioural categories defining how they communicated verbally and non-verbally. He got a prediction rate of 86% valid on whether they would still be together in two years or not, simply based on the analysis of their transactions. Gottmann is not a transactional analyst, but in a very real sense, he is a transactional analyst. In his 45 years of research (and counting!) all over the world, all sorts of couples, in all sorts of phases of relationship they identified four types of behaviors, which predicted break ups.

Many years ago, he met his wife, who at the time was (and still is) a very good couples’ therapist. She said, “John, now you know why couples separate, why don’t we create a therapy based on your research to help them stay together?”. Now, we not only know the four basic reasons why people split up, but also the four main competencies they need to stay together. I use their theories because within teams we also have to function within a network of relationships. Knowing why relationships breakup is just as important in a couple as it is in a team. 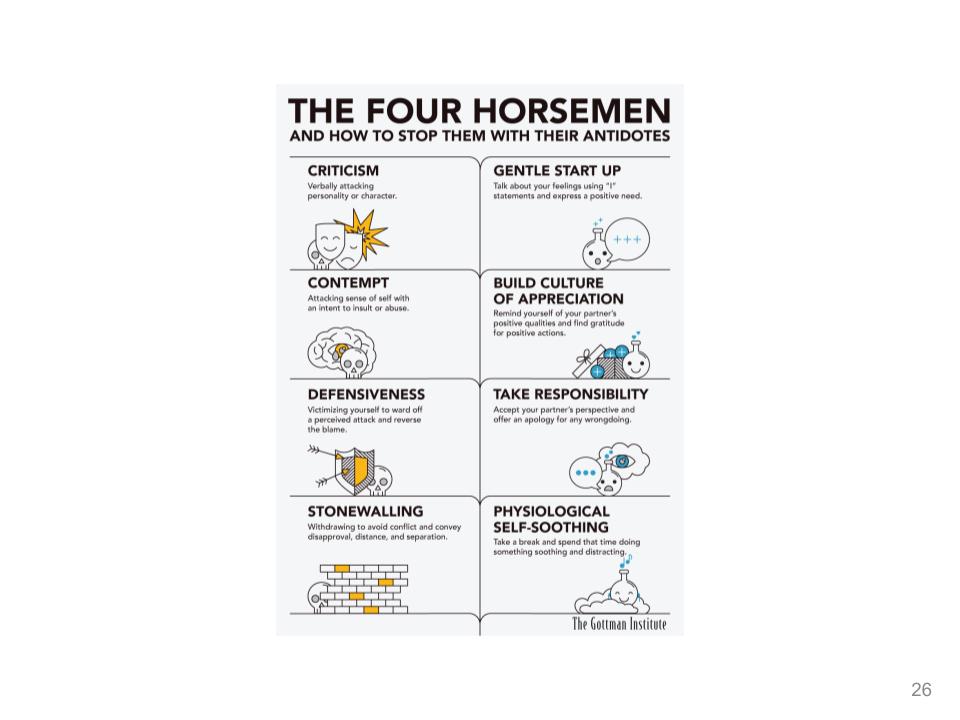 What are the four main reasons relationships break up?

When I work within teams, I sometimes see there’s one person, that is the scapegoat and carries a lot of the criticism in the group. Sometimes that’s the leader. That’s a real red zone. If the leader is continuously criticized, and people don’t accept their membership responsibility for managing that leader, then you’re in a red zone as a team.

The antidote to that is teaching people in teams gentle startups. It’s more than the feedback rules, it’s about saying something about yourself, Brene Brown would call that vulnerability. It’s really talking about the “I”. I sometimes teach the mental health karate to go with that. It’s (shows karate punches left, right, left) “the observation, what it does to you and your need”. It’s saying, “This is what I’m seeing you do. This is the effect on me. What I need is… What I would wish for us …. For example: What I see you do is focus a lot on what’s missing. What happens to me is I feel unrecognized. What I need is to get some positive feedback too, so I can stay open and work with you.”. That’s an example of gentle startups.

To do gentle startups, you should give the feedback, immediately, whatever it is. If you don’t then people save up stamps and when your little stamp book is full, you hand in the relationship. What you could be doing is handing in the stamps as you go along, so that you don’t have one big blow up at the end. If you have saved up stamps, it’s hard to do gentle startups.

The second reason relationships end is contempt. If you see people doing a lot of moving away, if they are insulting people or being abusive, this turning away from, or having contempt for someone else. These are all red flag behaviors. Occasionally, it happens between departments e.g. between production and sales. Sales is saying that production people can never keep up with whatever they’re selling, or the R&D people, the innovative people, are saying towards sales that they’re selling something R&D haven’t even invented yet I’m working within a professional organization at the moment, you’ve got professionals and then you’ve got staff, there’s a lot of contempt between these two groups. The staff is saying, “we know what’s best for the organization.”. The professionals who are helping the clients are saying, “we are the only ones who know what the client needs.”.

The third type of behavior is defensiveness. What you see is that someone doesn’t want to become a victim and they roll that on to someone else. For example, the leader gives feedback to a member and the member says, “yes, but you….!”. Then suddenly, the conversation takes another turn. It’s not about whatever it was, but becomes about the relationship.

One of the things that’s important is teaching people to take accountability. To teach people to say, “I’m sorry, you’re right.”. To discuss; “Can we talk about what we can do differently next time?”, “I can see from your perspective that you’re right.”, “From your perspective, I understand why you’re saying that. I come from a different world. Do you have room for me to tell you what’s happening in my world?”. Yes, no or maybe. Sometimes there’s no room and then you just have to say, “I do. I get it!”. Taking responsibility, making people accountable, or helping people to take accountability and apologizing is important in teams.

Apologies are underrated. I think it doesn’t happen enough. There are apologies that are real, and apologies that are fake. If you’re giving fake apologies, forget it. That’s the same as having contempt. However, if you have a real apology, don’t hesitate to give it.

The Fourth, and main, Horsemen of the Apocalypse is stonewalling. Stonewalling as people are talking to you. For example: You’re saying something important about your relationship and they are reading the newspaper. That’s quite a visible way of stonewalling. Within teams, it can happen one of two ways, either it’s explicit, people move away from conflict, or it’s implicit and people listen but they shut off inside. Both are just as bad. It prevents teams from storming explicitly, and never get to the negotiation or norming stage. What’s important is teaching people to self-soothe, to be able to say, “Hold on a second, this is a bit much for me, give me five minutes!”. Then take that time to go out, make tea, hug yourself, hug your dog, do whatever you need to do, to get back into that state of, “I’m willing to be open but protected.”. Distract yourself, if need be, but fill yourself with love in some way or another to be able to come back and to be open to the other person. Within a work context, that means using humor, taking coffee breaks, going for a walk outside. Sometimes when people are stuck in conflict, I don’t stay in the office, I don’t sit down, I actually walk with them. If you walk, it’s impossible to stay stuck in not only a physical position, but also a psychological position. Teaching people to self soothe is really important. Some kids never learned to do that, but it’s an important skill to have. Otherwise, you’ll stay dependent on other people to do that for you.

Check it out. Where are you on a scale of one to ten with criticism, contempt, defensiveness, and stonewalling your team? What competency would you need to learn most?

If you need help with that, give a call.