Team Coaching: The Six Norm Issues That Come Up In Group Development

In group development we often talk of the norming stage of group development. Based on research we can actually predict which norm issues come up time and again from respecting time to respectful listening and consequence management.

My name is Sari van Poelje. I’m the Director of Intact Academy and of Agile Business Innovation. You can find our websites to participate in our programs at www.intactacademy.com and www.agilebusinessinnovation.com.

We were talking about development stages in groups, the relational development, the imago development and the dangers of staying in crisis. What I want to talk about now is that important phase from storming to norming. We talked about the storming phase where people start to challenge the procedures in a group and to challenge the leadership. The puberty stage where members start to push against the leader, but also against each other, to come to a place where they decide to accept what they need to give up to belong to the group. I want to talk a little bit about the norm issues that I usually see in groups, and the techniques I teach people to get through that norming stage.

The techniques are based on the work of John Gottman. He’s a very good couples therapist who developed his own Gottman Method. Negotiating well means the ability to keep a relationship and to focus. Be soft on the relationship, but hard on the task.

One of the norm issues that come up is decision making. Who has formal power and who has informal power? People start to fight about who takes the ultimate decisions. What’s important is that the leader sticks to the formal hierarchy and makes an alliance with the informal hierarchy. 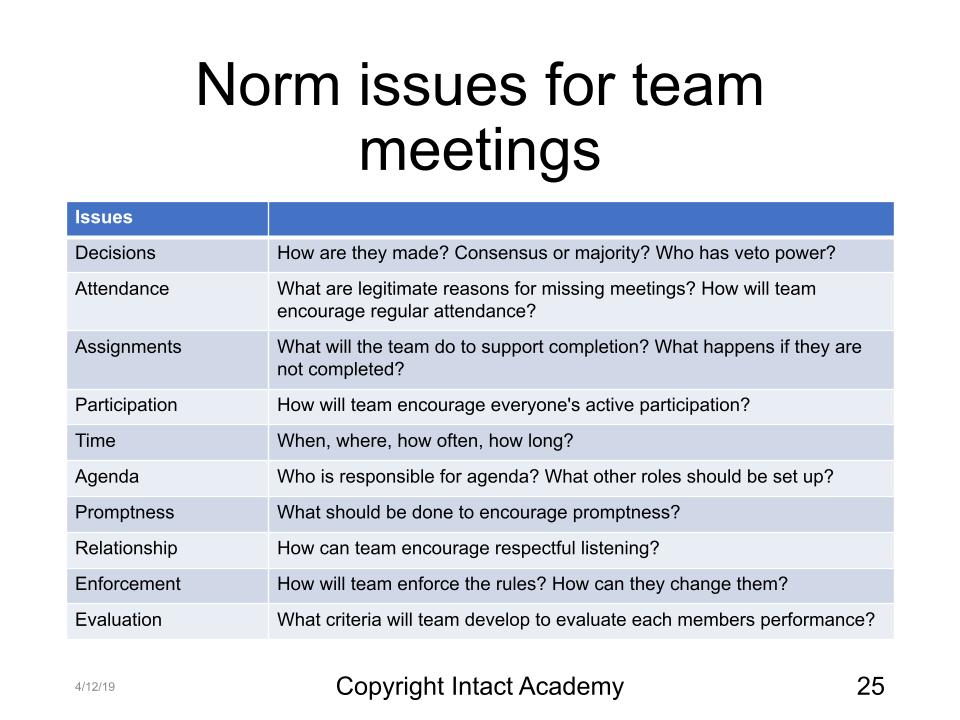 Assignments. During the norming stage I teach teams “contact, communication and consequence management”. This is about consequence management. What do you do if people don’t keep their commitments? I encourage the leader to push that discussion towards the members. What are you going to do if Tom doesn’t do his task? What do we need in this group to have active participation? What do we need to talk about? What should we not talk about?

Agenda. Timing. Promptness. One of the norm issues is respect for the time boundaries. I know this is also a cultural thing. Wherever you are in the world, I would encourage you to keep the time boundary. If you want to start at nine o’clock, start at nine o’clock, regardless of if you’re the only person in the room. If you don’t do that people won’t feel they’ve missed out, so you’re encouraging people to come too late.

I remember one group, we did an experiment. People who were on time just came in. If you came too late the doors were closed and you had a conversation with the person at the door. A coaching conversation: What happened to you? Why are you late? I guarantee you that people came on time afterwards. It was an interesting experience. People have life scripts around time. Time is a very important norm issue, just like money is.

Another thing that comes up during the norming discussions is relationships. Part of that is respectful listening. What does that mean in this group? It doesn’t mean that people have to shut up passively when someone is speaking. Sometimes people have their facts wrong, for instance, are you going to respectfully listen to that? When do you interrupt each other? What kind of rules do you have for speaking? Some people speak longer, some people speak louder, some people don’t speak. It’s good to encourage the members to decide that amongst themselves.

Enforcement is another norm issue that often comes up. Who’s going to say, “you shouldn’t be doing that!”. As a group leader, I tend to make as few rules as possible, because my starting point is trust. If you do have rules, you have to enforce them. If you have rules you don’t enforce, they’re not worth the paper they’re written on. For instance, if you say the rule is being on time, and then people regularly come too late and if you don’t enforce that by saying, “next time, you’re not allowed into the meeting.”, or, “you have to speak to someone at the door before coming in.” you implicitly validate crossing time boundaries. If you don’t enforce a rule, you’re undermining your authority. The question for the leader is; what are the minimum amount of rules you need for team functioning?

The last thing I want to mention is; How will you evaluate the members performance, but also the team performance? Of course, the leader has something in mind, and that’s important. They contracted KPIs at the beginning, but in this storming to norming phase, maybe other criteria emerge and it’s important to make that explicit.

There may be other norm issues, and it would be interesting for you to check and to do a check with each other; Have we actually gone through these things? What were our decisions? Make those decisions explicit and negotiate them if you haven’t gone through them yet. Then the pressure is on the group to co-create their system and their culture, instead of just the leader enforcing something.

Let me know how you get on.